Ninja Is A Poes

Watkin Tudor Jones is a poes, no doubt about it. Maybe I should just call him Waddy. Waddy the twaddy. Waddy is a poes who pretends he’s hard but is nothing but a sell-out “faggot”. Even Yolandi Visser says so. 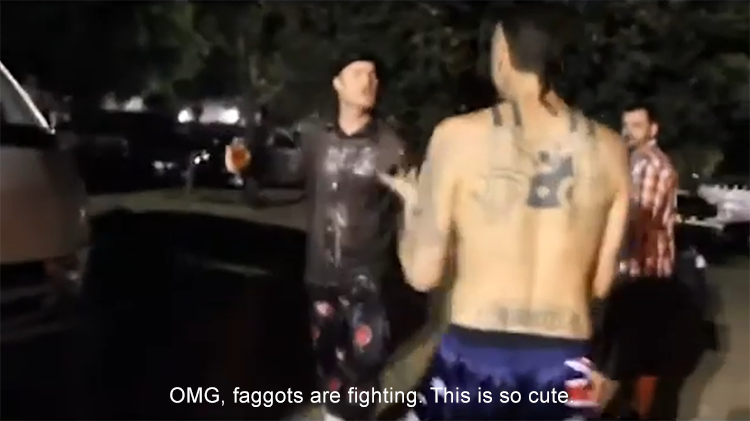 “OMG, faggots are fighting. This is so cute.” – Yolandi Visser

Ninja the wannabe tough guy talks a lot of shit. I used to be a Die Antwoord fan, until fame got to Waddy’s head and turned him into a poephol.

Unfortunately, that seems to be the case with most celebrities these days. I’ve met a few famous poephols in my day and they’re all the same. Arrogant for nothing. Just because the media promotes their golden arses, which then automatically leads to them amassing a huge following, they suddenly think they’re God’s gift to mankind. They’re the blind leading the blind, and you know what ends up happening to those people, right? 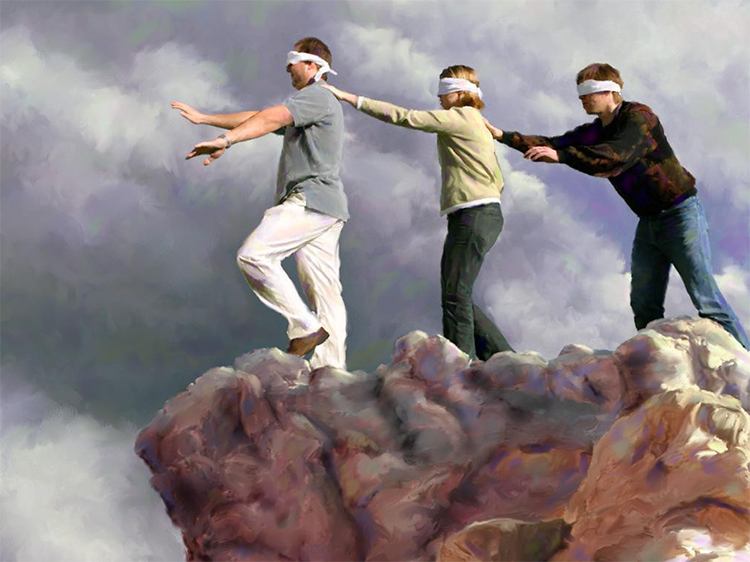 Famous people don’t phase me and that’s because they’re just people. I’ve got lots of stories to tell you about these arrogant arseholes but for now, let’s stick with Ninja. Just because somebody has tattoos and can bust a rhyme it doesn’t mean they’re gangsta. Here we have a guy who in 2007 stated that he doesn’t “suck corporate cock”, but then turned around and did just that when he signed to Interscope … and he’s still sucking hard. 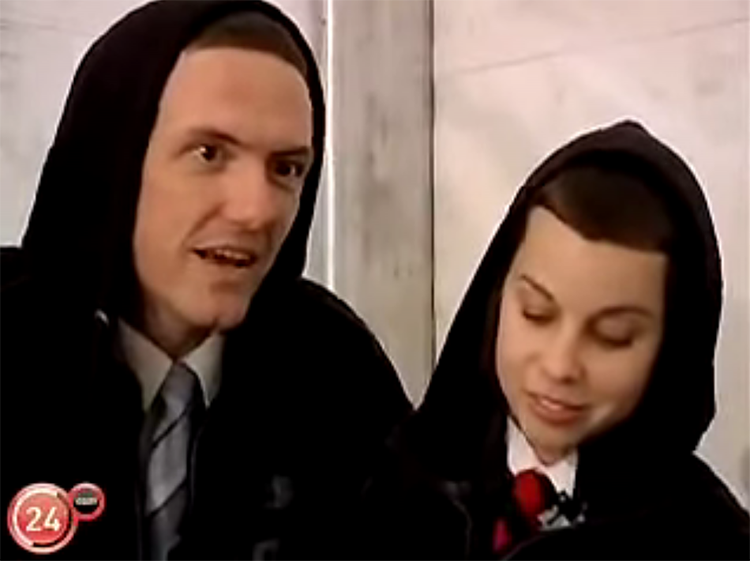 “If somebody were to ask [sic] accuse me of selling out I’d ask them, ‘what do you mean?’ and then maybe we could take it from there because I’m not … I think that means sucking, like kind of, the corporate cock which is not really my thing.” – Watkin Tudor Jones

I beg to differ. Not only is both Watkin and his puppet, Anri Du Toit (Yolandi Visser), hypocritically sucking the corporate cock, they’re also so full of themselves that they think they’re untouchable. Watkin Tudor Jones is not only a sell-out, he’s also a homophobe, rapist and pedophile. Both he and Yolandi also boast about being vegan but what’s the point of being cruelty-free to animals when you’re also cruel to humans? The hypocrisy never ends.

In 2013 Ninja raped an Australian woman, Zheani Sparkes, because she resembles his daughter, Sixteen. Gross.

“Watkin Tudor Jones is not only a real jerk, he’s a full-on hostile sexual predator who thinks he can get away with it because he’s ‘famous’ and ‘in character’.” – Zheani Sparkes

Zheani filed a police report against Watkin in September, 2019 and that’s just the beginning of his karma. You really need to read the texts between Ninja and Zheani to get an idea of how this guy operates. It makes me sick to the stomach. 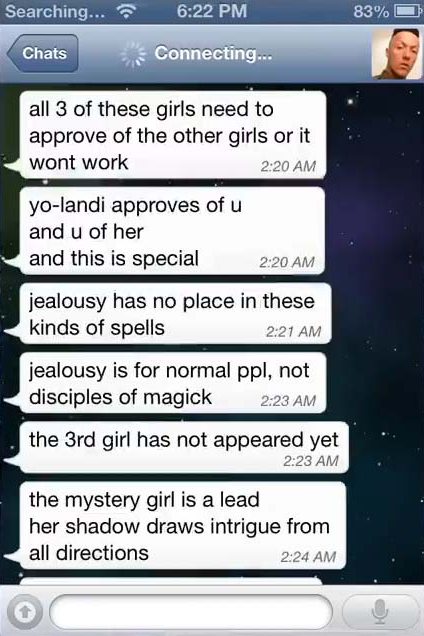 Ninja pretends to be a High Priest of magick in order to lure young girls in so he can rape them. 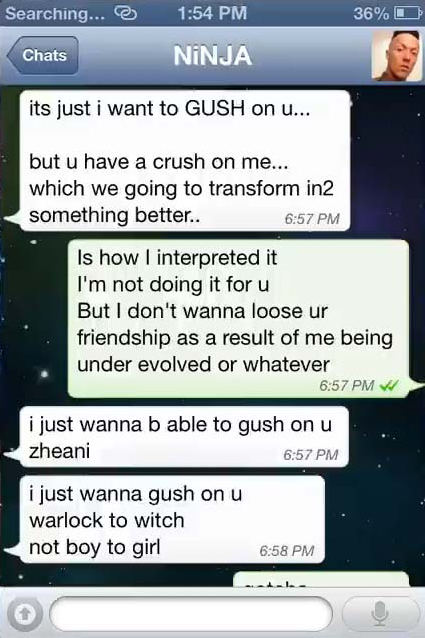 He makes Zheani feel special by telling her she’s a “witch” (who’s just about to be raped by a “warlock”). 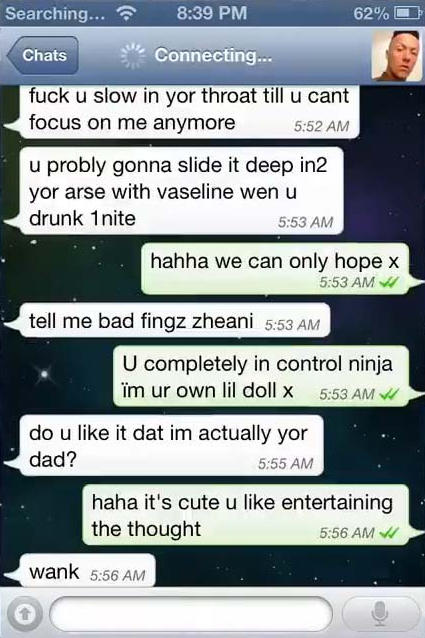 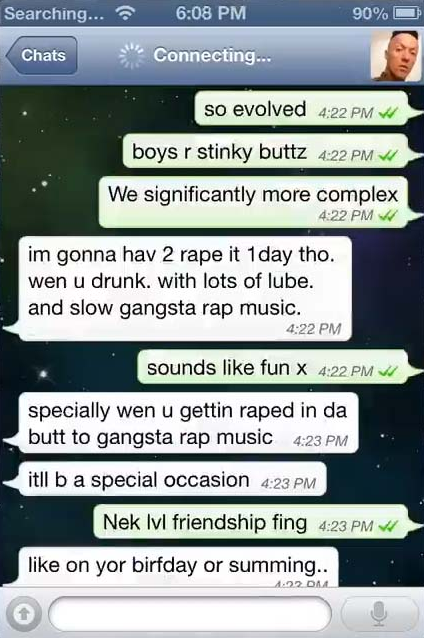 … and admits he’s a rapist.

That’s enough of that. I seriously feel like throwing up. If you want to see more, read the rest of the text messages here. If you’re still a Die Antwoord fan after reading them then you’re just as screwed up as Waddy the Wanking Warlock. I know the type. Been there, done that.

If you want to see a pair of homophobic idiots in action then watch this video which was filmed at the 2012 Future Music Festival in Adelaide by their former videographer, Ben Crossman. Yolandi accuses Andy Butler from Hercules and Love Affair of “feeling her tits and her ass” and then calls him a “faggot”, because that’s what gay guys do. They feel women’s tits and asses. Somebody call the bullshit brigade. 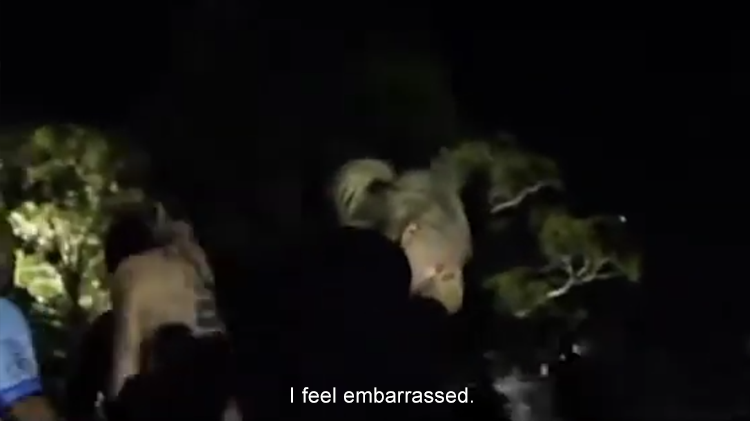 Yolandi pretends to cry and be “embarrassed” by the drama she’s caused. 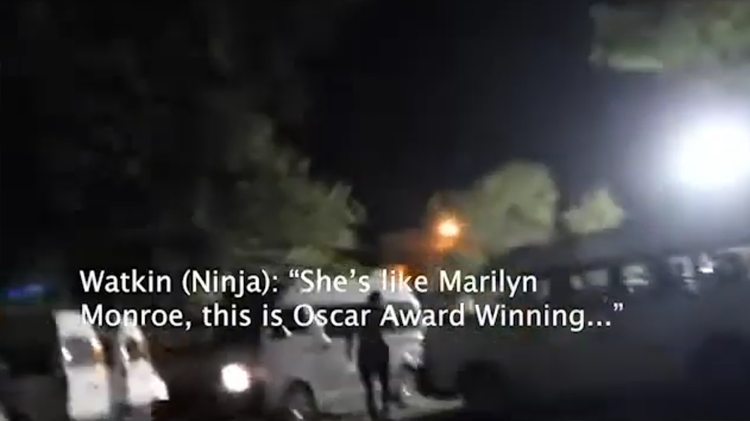 “She’s like Marilyn Monroe, this is Oscar Award winning …” – Ninja

Waddy admits that Yolandi is acting. No wonder he’s shitting himself and filing copyright claims on all the YouTube videos that expose the both of them as being frauds.

Still not convinced that Ninja and Yolandi are arseholes? Then watch this video of Yolandi laughing at a group of homeless people in Paris. 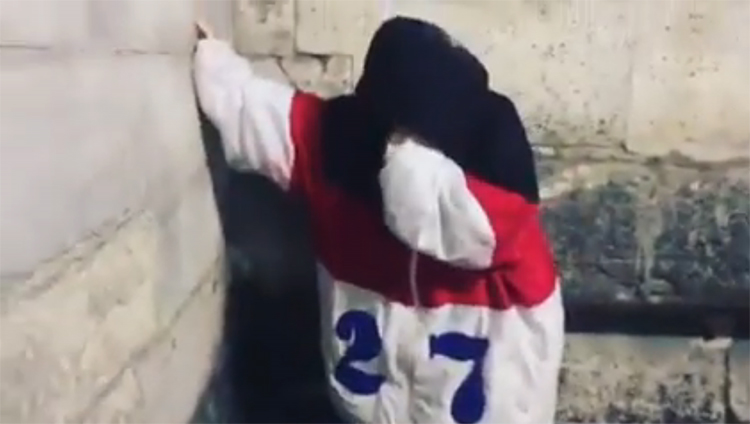 So, is Ninja and his partner in crime, Yolandi Visser, poese (cunts)?
Die Antwoord (“The Answer”) is YES! 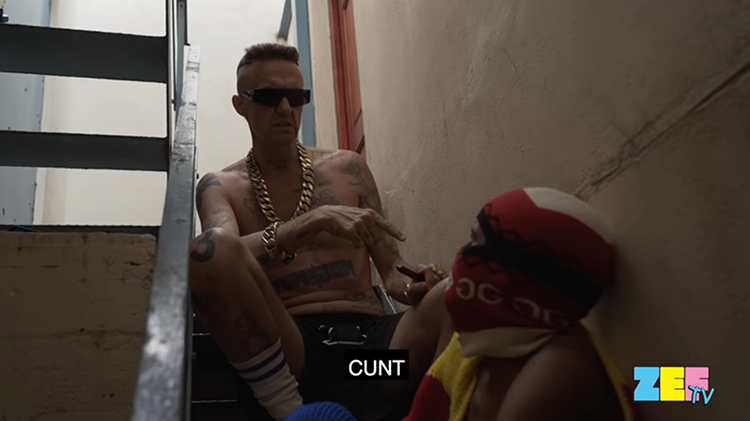 Die Antwoord Defaced. Acrylic and spray paint on canvas (36″ x 60″). Originally valued at $12,600 but I am now giving it away for FREE. A hell of a lot of work has been put into this painting. It took me over a month to complete … and less than a few minutes to deface. I used to be a Die Antwoord fan until fame got to Ninja’s head and I read the Zheani Sparkes “sexual assault” story.

If you want to be the proud owner of a painting that will go down in PAZ’s pop art history and be part of the legendary fall of Die Antwoord, then click here.

Disclaimer (for the haters): The blog posts on this site are a compilation of my opinions and facts based on my personal life experiences. If you have a problem with me voicing my thoughts, then you’re also a poes.